It was on May 8, 2018, that one of the pretty Bollywood damsels, Sonam Kapoor became Sonam Kapoor Ahuja by tying the knot with her boyfriend, Anand Ahuja. While all of us were glued to our mobile screens to get each and every glimpse of the wedding, what caught our attention was Sonam’s baby sister Rhea Kapoor and her rumoured boyfriend, Karan Boolani’s significant presence as a couple during all the functions. (You May Also Like: Sanaya Irani Welcomes Nephew In Her Family, Introduces Him To Everyone With A Lovely Picture)

Soon after Rhea and Karan were found vacationing in the Maldives together spending some quality time. And recently, Rhea’s marriage rumours with Karan were like an icing on the cake! A report by Bollywood Hungama stated, “Karan Rhea seemed in no mood to solemnize her relationship. Anil is not the kind of father who pressurises his children for anything. Since Rhea wanted to take her time, Sonam got married first.” And adding further on the account of Rhea’s wedding, it remarked, “Anil has already accepted Karan as part of his family. He is as close to Karan as he is to Sonam’s husband Anand. Marriage would be just a formality but one that Anil is looking forward to.” 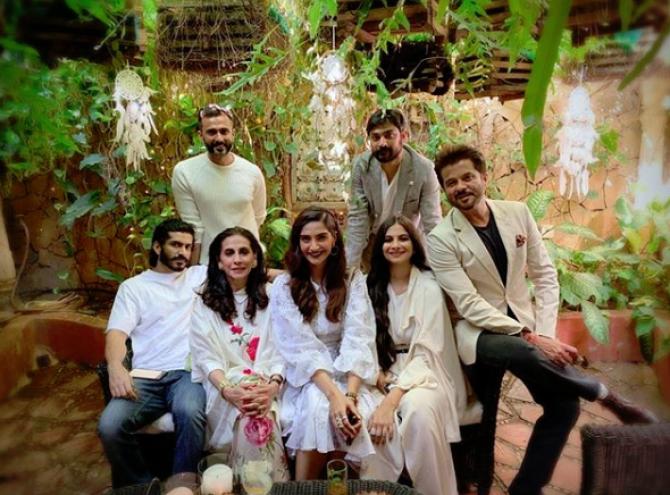 Now, in an interview with Gaurang of Zoom TV, Sonam Kapoor confirmed that her baby sister Rhea is dating Karan Boolani. Not just this, she even went on to add that it’s been 10 long years that the two are seeing each other. When the journalist asked Sonam, “Also, there are reports of Rhea getting married to Karan Boolani”. Pat came her reply, “Oh, no. When she does get married, I'll be very happy to tell you. They've been dating for 10 years, they've not gotten married yet. When the happy news is there, it'll all be announced. But, no, they are not getting married this year.” (Checkout: Shahid Kapoor Takes Daughter Misha Out On A Bike Ride, He Can't Stop Looking At Her Innocent Face) Do you know papa Anil Kapoor arrived late at the time of Rhea’s birth, which he regrets till date? Yes, that’s right! The doting and loving papa himself shared it with his fans on Rhea’s March 5, 2018. He took to his Instagram profile and shared a stunning snap of his daughter. Along with it, he wrote, “Happy Birthday to the one person in this world with whom I can speak my truth without hesitation or apprehension! No matter what life throws at her, @rheakapoor handles it all with a grace & strength that is beyond her years. Your honesty, your fearlessness & your grit is an inspiration to everyone that knows and loves you, and I'm so proud to call you my daughter! Love you forever Beta! (PS: Even after all these years, I have not been able to forgive myself for arriving late at the time of your birth!)”. (Also Read: 'Race' Actress Sameera Reddy Is Expecting Her Second Child, Says This One Is A Planned Baby) 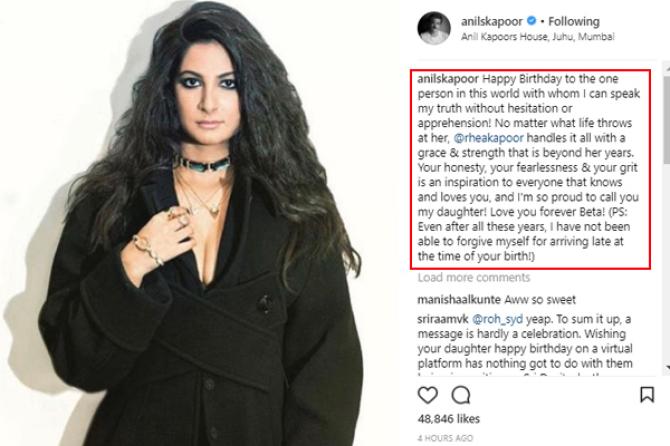 Talking about his kids, Anil once shared, “They are working in their own style. Be it Rhea as a producer/stylist or Sonam and Harsh as actors, I am happy that they know their work. They have a standing of their own. Till date, I haven’t had to make or plan a film for them. They always get work from elsewhere. It’s not as if I launched my son or daughter. Even I haven’t worked in any of my home productions till date. We have given money to others from our own pocket (smiles)”. In an interview lately, the Ek Ladki Ko Dekha Toh Aisa Laga actress shared a piece of important advice for all those who wish to get married, “It is indeed a matter of great opportunity to be able to find a good partner in life, which is of utmost importance for all of us. We should never for any wrong reasons or being under any pressure or because of our increasing age [growing older] just get married hurriedly. You should wait for the right partner. Those parents who are reading this piece, I request them to not pressurize their children to get married soon or get married for whatever reasons”. (Don't Miss: Ranveer Kisses Deepika On Their Dinner Date As Paparazzi Click Them, Their PDA Is Unmissable) 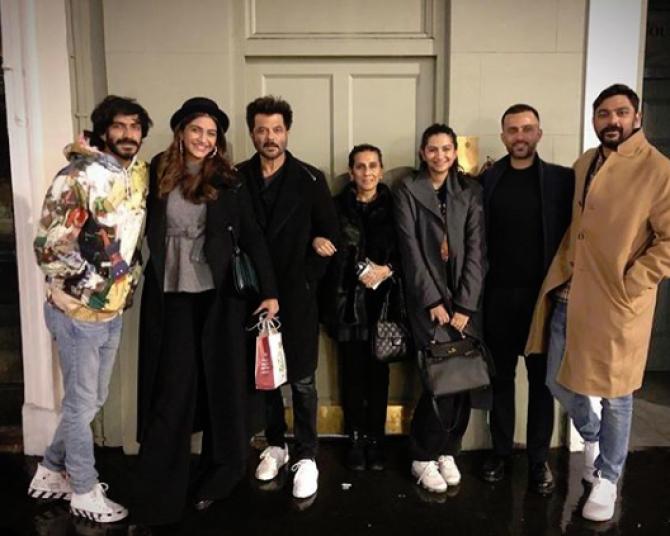 Finally, Sonam Kapoor revealed that Rhea and Karan are dating each other. Well, guys, now your fans are eagerly waiting for you two to tie the knot!