If you haven’t yet zeroed in on your engagement couture and make-up, we have got you some fabulous and fascinating ideas from your favourite world of television. You can look up to the epic engagement couture of these Indian telly beauties who have wowed us with their unique, versatile and out-of-the-box style statements.

Recommended Read: 20 Popular Bollywood Comedians And Their Lesser Known Life Partners Who Are Their Inspiration

Unseen Pictures Of Niti Taylor And Parikshit's Engagement Ceremony Is Cute, Goofy And All About Love

Garima Jain, Rumoured Ex Of Vivian Dsena Gets Engaged To A Diamond Merchant, Details Inside

Apart from the ooh and aah, you can vouch for these sultry actresses to streamline your own engagement day planning. Here is a roundup of our favourite engagement wedding attires. The bold and beautiful actress Aashka has always fired it up on the small screen. Well, she was equally sizzling and shining on her engagement ceremony in a navy-blue salwar suit. The attire was all about the old-world charm with a modern-day twist. The floral multi-coloured dupatta was looking quite resplendent and attractive. With a long Kundan neckpiece, she was dressed to thrill. She also made a mark with a bride and groom henna pattern on her hands. Unlike other ladies, actress Aashka is reported to go down on her knees to get married to her boyfriend Brent Goble. 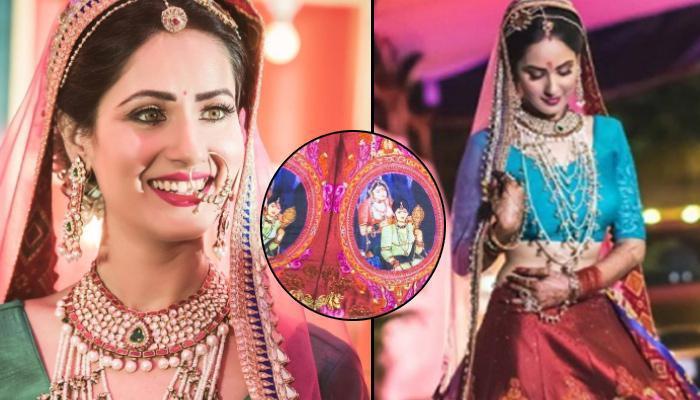 Tujh Sang Preet Lagayi Sajna actress Puja Banerjee dazzled at her engagement ceremony on August 16, 2017, wearing a blue and pink Rohit Verma lehenga choli. She got engaged to Kunal Verma and was looking no less than a queen on a special night. She teamed her unique embroidery outfit with heavy jadau jewellery. We just loved the multi-coloured couture, which is the choice of the modern-day bride. Madhuri Dixit Shares Glimpses Of Her Married Life With Hubby, Sriram Nene On Their 22nd Anniversary

Rakul Preet Singh Gives A Sweet Reply To A Paparazzi, Who Congratulates Her For The 'Birthday Post'

The laughter queen of Indian television, Bharti Singh looked like a million bucks at her ring ceremony where she kept her look very discreet and suave. She chose to wear a lovely red-coloured gown and teamed it up with elegant diamond jewellery. With her stylish open locks and minimal make-up, she made her the hottest comedian ever. In fact, she gave us some serious bridal fashion goals all throughout the string of events and ceremonies. Bharti Singh and her boyfriend Haarsh Limbachia had a destination wedding on December 12, 2017. Assistant director-cum-girlfriend to Mere Angne Mein fame Karam Rajpal planned out every detail well, and finally became the cynosure of all the eyes at her intimate roka ceremony on January 15, 2018. Donning a typical red traditional salwar suit, Shivalika looked every bit stunning. Golden-embroidery and a red dupatta on the extensive suit added to her charming Indian looks. The odhni on the head completed her ceremonial avatar.

You May Also Like: 6 Bollywood Beauties Who Chose To Wear Manish Malhotra Creation On Their Wedding Day 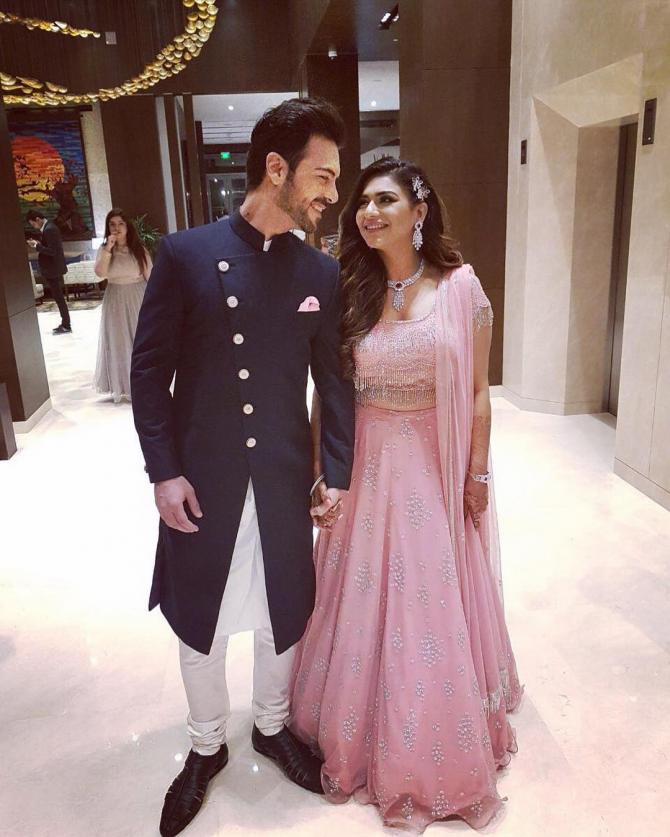 The traditional powder pink lehenga choli with a dupatta made actress Poonam Preet’s appearance versatile and eye-catching. The floor-length salwar suit looked innovative and traditional at the same time. No wonder the Naamkarann actress made an eternal style statement on her engagement ceremony to Kundali Bhagya actor, Sanjay Gagnani on February 18, 2018. 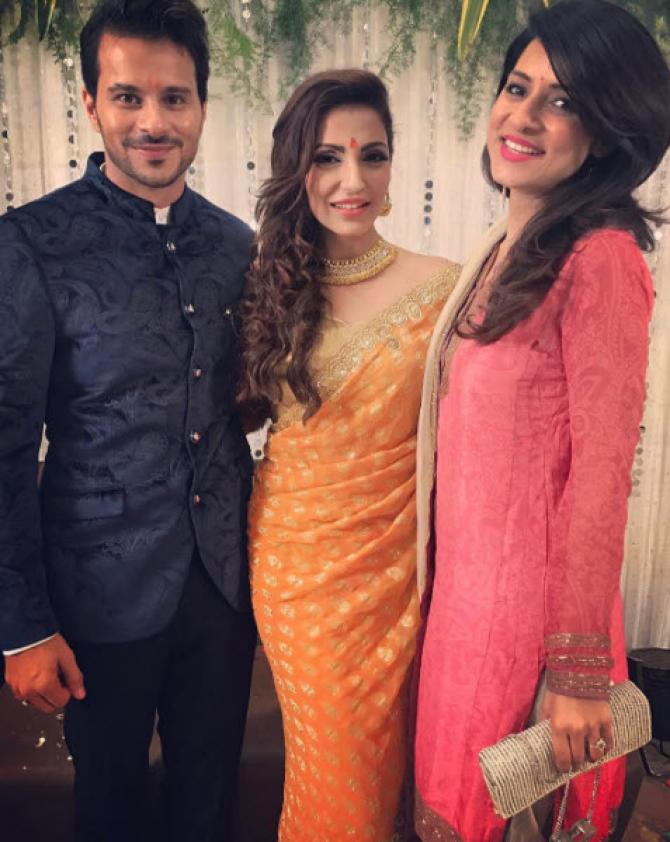 Navina Bole aka Tia of Ishqbaaz has become a household name today. The talented telly actress got engaged to her long-time boyfriend, Karran Jeet in a traditional manner. She is the perfect example of a minimalist diva on her engagement ceremony. She opted for an ethnic embroidered orange saree. Neither her make-up nor her jewellery or outfit was over the top. Clad in a simple work saree teamed with a golden blouse and side-swept hair, she depicted elegance and grace. 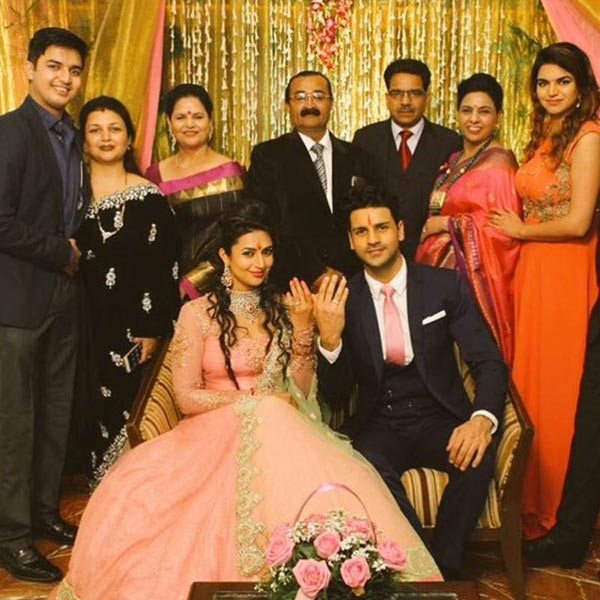 Divyanka is no wonder one of the most popular television brides who slew it in all her pre-wedding avatars. Though her wedding with Vivek Dahiya was one of the much talked-about wedding affairs of the telly world, her engagement was a close-knit affair in Chandigarh. For the ring ceremony, she wore a slightly heavy outfit teamed with beautiful choker neckpiece. The outfit was all about the soft pink hue, long net sleeves and floor-length pattern. The pista-green dupatta was adding up to the ethnic flare and charm.

Must See: 11 Most Loving Celebrity Husbands From Bollywood Who Are Real Heroes To Their Wives 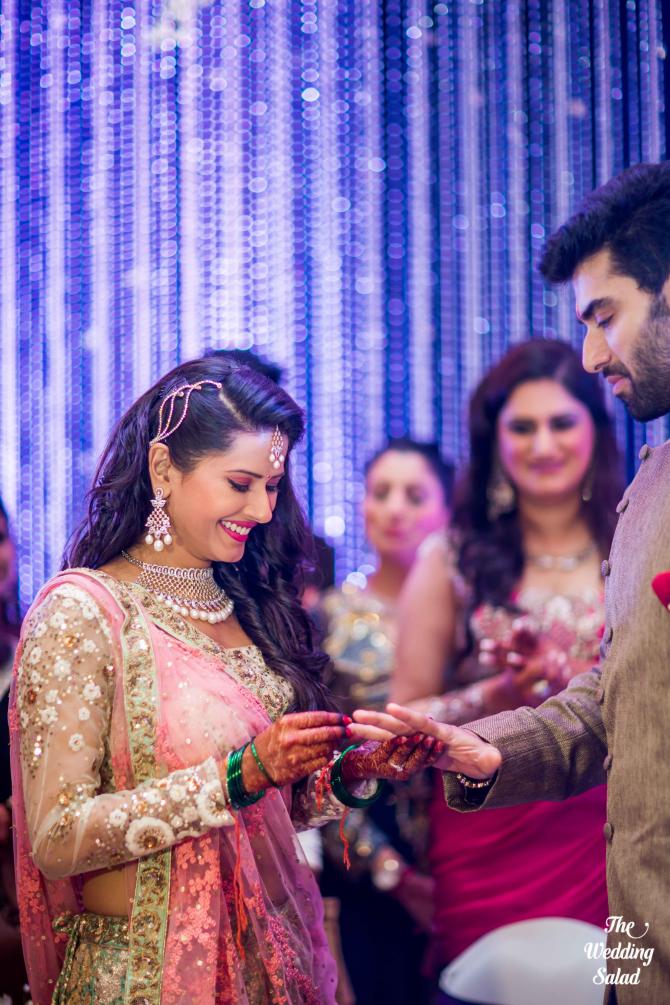 Be it a character she plays or any ensemble she puts on, television beauty Kratika Sengar never fails to make an impression with her appearance. Like always, she stunned everybody with her style statement and personal touch on her engagement day with Nikitan Dheer, son of yesteryear actor Pankaj Dheer. Kratika was looking awestruck in her beautiful beige and cyan coloured lehenga. It was a combined ceremony that hosted sangeet as well as the cocktail party. The pretty actress’s take on make-up was subtle. However, she established a perfect traditional look with a mesmerising maang teeka. 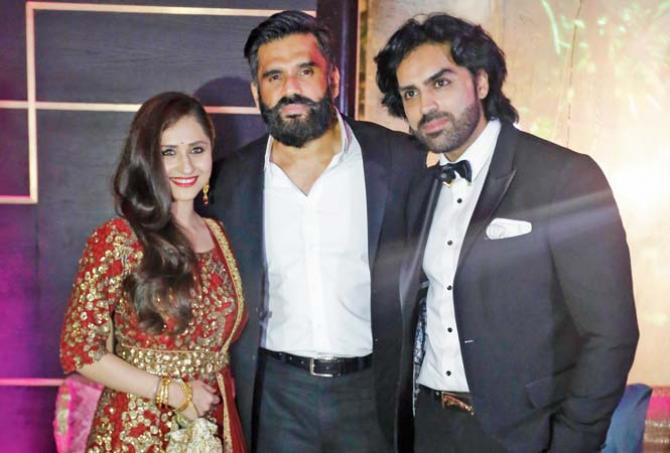 Actress Hunar Hale was no less a beautiful and attractive bride-to-be at her engagement ceremony with Mayank Gandhi. Hunar Hale gave the brides-to-be some new goals to establish on their big day. The actress was looking delightful in a front-slit heavy maroon and golden outfit. The attire cleverly merged with new-age pattern and style. The fashionable babe left her tresses loose to complement her floor-touch couture. She accessorised herself with a cute yet traditional golden pouch. The dupatta made the attire more classic and royal. Brides-to-be will love to watch out for actress Deepika Singh’s amazing colour combination on her engagement ceremony with Rohit Raj. The deep red and purple outfit with rich gold embroidery will inspire you to grab the style right away. The beautiful rich zardosi embroidery on neckline turned her couture into one unique creation. So, Bhabho who defies all norms in reel-life defies the trend of traditional colours and went for an innovative combo of red and purple.

Also See: 20 Most Glamorous And Talked-About Bollywood Weddings Of The Last Two Decades Ankita Bhargava went for a peppy and charming outfit for her engagement to Karan Patel on March 14th, 2015.  The telly couple got hitched to each other on May 3, 2015. Ankita garnered plenty of accolades and attention for her beautiful maroon and gold full-length anarkali dress. We all loved her bright and intense colour choice. She colour-coordinated her lively outfit with her fiancé. 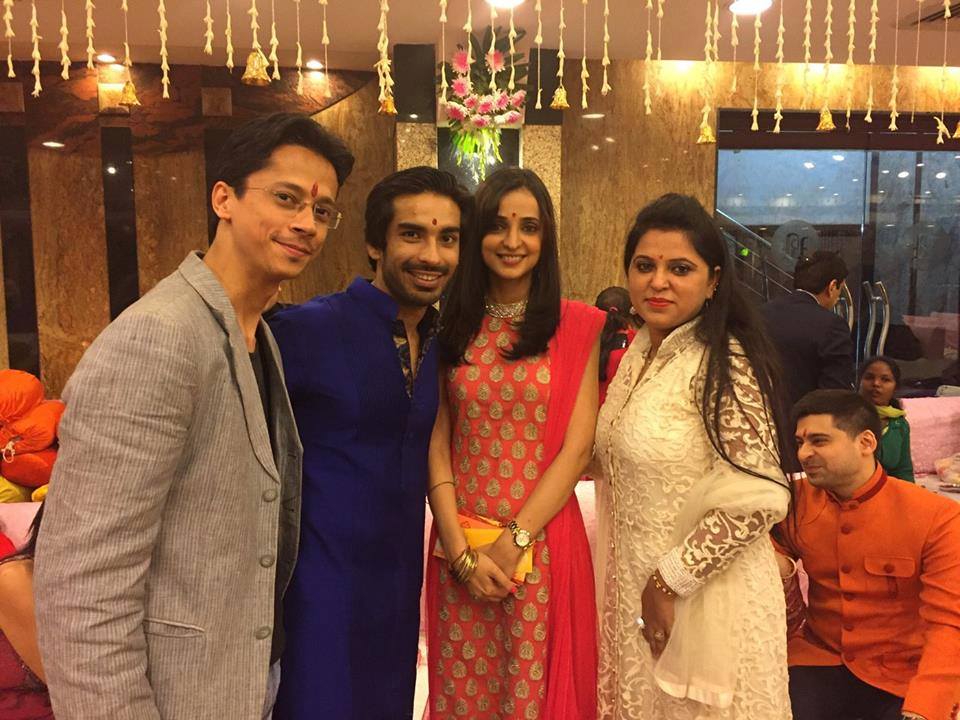 Television couple Sanaya Irani and Mohit Sehgal had a famous destination wedding in Goa. But before that, the couple opted for a secret roka ceremony at Mohit’s Delhi residence to be held on December 13, 2015. The gorgeous embellished salwar suit that the talented actress opted looked completely graceful and apt as per the occasion. The dupatta on the embellished pink suit made the attire look more festive. 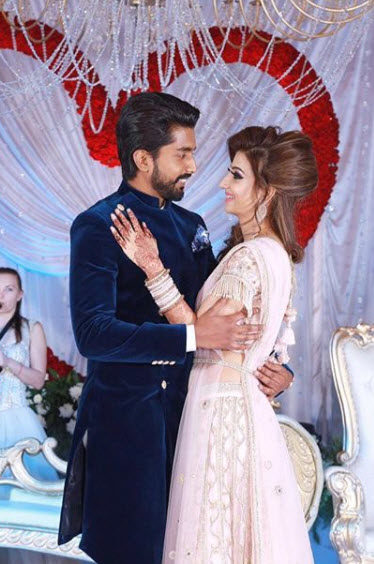 Saath Nibhaana Saathiya actress Loveleen Kaur Sasan opted an indo-western outfit in a pastel pink colour. Also known as Lovey Sasan, the actress had a grand like literally grand engagement with Koushik Krishnamurthy. The elegant babe highlighted the outfit and wore matching bangles with it. Her make-up, hairdo were all on point! 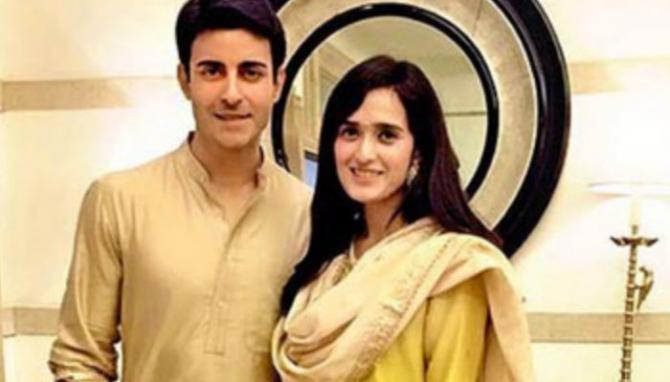 Razia Sultan actress Pankhuri Awasthy got engaged to Suryaputra Karn fame actor Gautam Rode during Diwali before which they had a ring ceremony. Pankhuri went for a simple salwar suit to spruce up her traditional look at her engagement function. The bright yellow coloured salwar kameez added immense charm and dimension to her ethnic avatar. The dupatta further enhanced the Indian look. The couple got married on February 5, 2018. 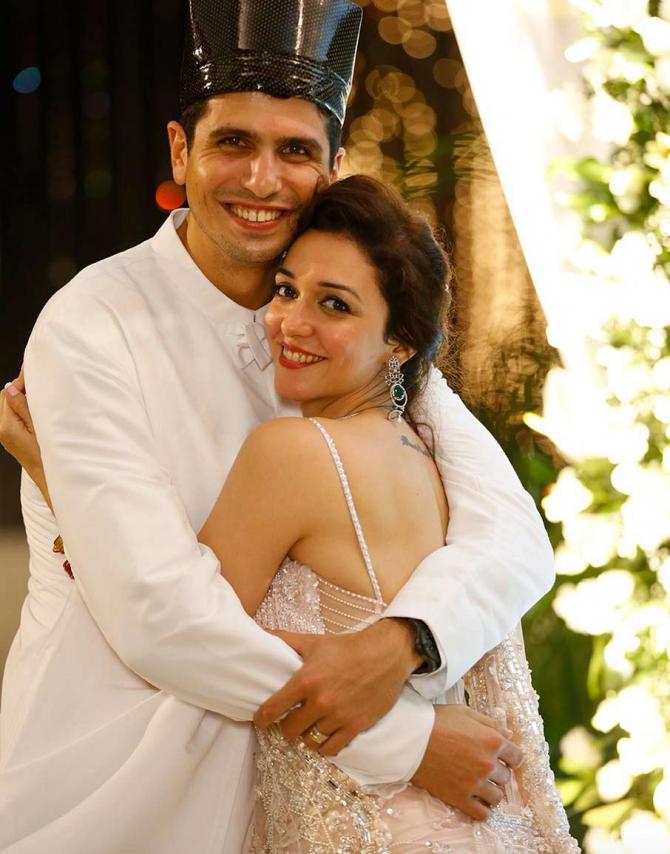 For her engagement, Hip Hip Hurray fame Nauheed wore a pretty flared and flowery blue number. Her ravishing bright blue attire looked like a piece of artwork that unfolded her charming persona. The cold-shoulder dress left us completely awestruck. She got married to her long-time boyfriend, Rustom in an intimate Parsi wedding on January 5, 2017.

Also Read: 10 Celeb Couples Who Colour-Coordinated Their Outfits On Their Wedding Day And Gave Us Wedding Goals 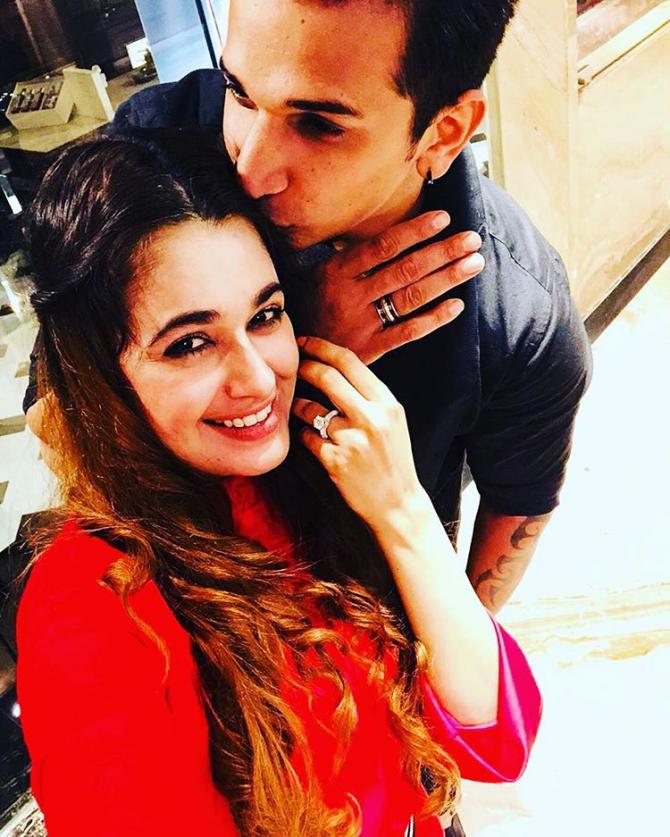 Big Boss contestants Yuvika Choudhary and Prince Narula shared beautiful pictures of their engagement on Instagram. Her red outfit for the engagement was looking hot and extravagant. The designer piece in intense colour had the charm and sophistication of its own. Her creative hairdo added to a great style factor. Ishq Ka Rang Safed actress Jaswir Kaur got engaged to her boyfriend Vishal Madlani in an opulent ceremony in Mumbai on February 28, 2016. The richness of Indian culture was sewed up in her garment that looked majestic and regal. The pretty dress will not only stand as a special couture but also a beautiful memoir. Her heavy jewellery speaks a lot more and looks extraordinary. With a lovely hairdo, she is looking like million bucks.

Recommended Read: 15 Famous Bollywood And Television Celebrities Who Had An Arranged Marriage

Each of the actresses is reflecting a distinct personality and choice on their engagement ceremony. It’s time to epitomize the story of these lovely ladies in different avatars and look as resplendent as your favourite celebrities. Just have the clues and give your couture, jewellery and make-up the definition of its own.