Twinkle Khanna looked like a happy bride in her unseen 'mehendi' ceremony pictures from her wedding with Akshay Kumar.

Akshay Kumar and Twinkle Khanna’s marriage was dependent on the box office results of the film, Mela (2000). Twinkle had bluntly told Akshay that she would marry him only if her film, Mela tanks at the box office, and the movie had not worked well. The misfortune of Mela had become the fortune for Akshay and on January 17, 2001, he had tied the knot with Twinkle. They had got married in the presence of 50 people and that too, in just two hours.

On January 17, 2021, Akshay Kumar and Twinkle Khanna had celebrated their 20 years of togetherness. Twinkle had reposted a picture shared by her hubby, Akshay Kumar, on her IG handle and had captioned it as:

Twinkle Khanna Talks About Dividing Bills With Akshay Kumar, Says She Pays For Their Kids' Education

"You are the beauty and the brawn in this partnership and I can’t even say I am the brain because you are smarter than me. We don’t need each other to be complete( that’s just a cliche from soppy ballads) but we want to have the other one around always and that is perhaps the only way it is meant to be. Happy Anniversary Mr K." To wish Twinkle Khanna on her birthday, Veena Nagda took to her IG stories and posted unseen pictures from the actress' mehendi ceremony. For her mehendi function, Twinkle had worn a yellow and purple suit with floral motifs and had accessorised her look with floral jewellery. Her henna clad hands and feet, and happiness on her face were unmissable. 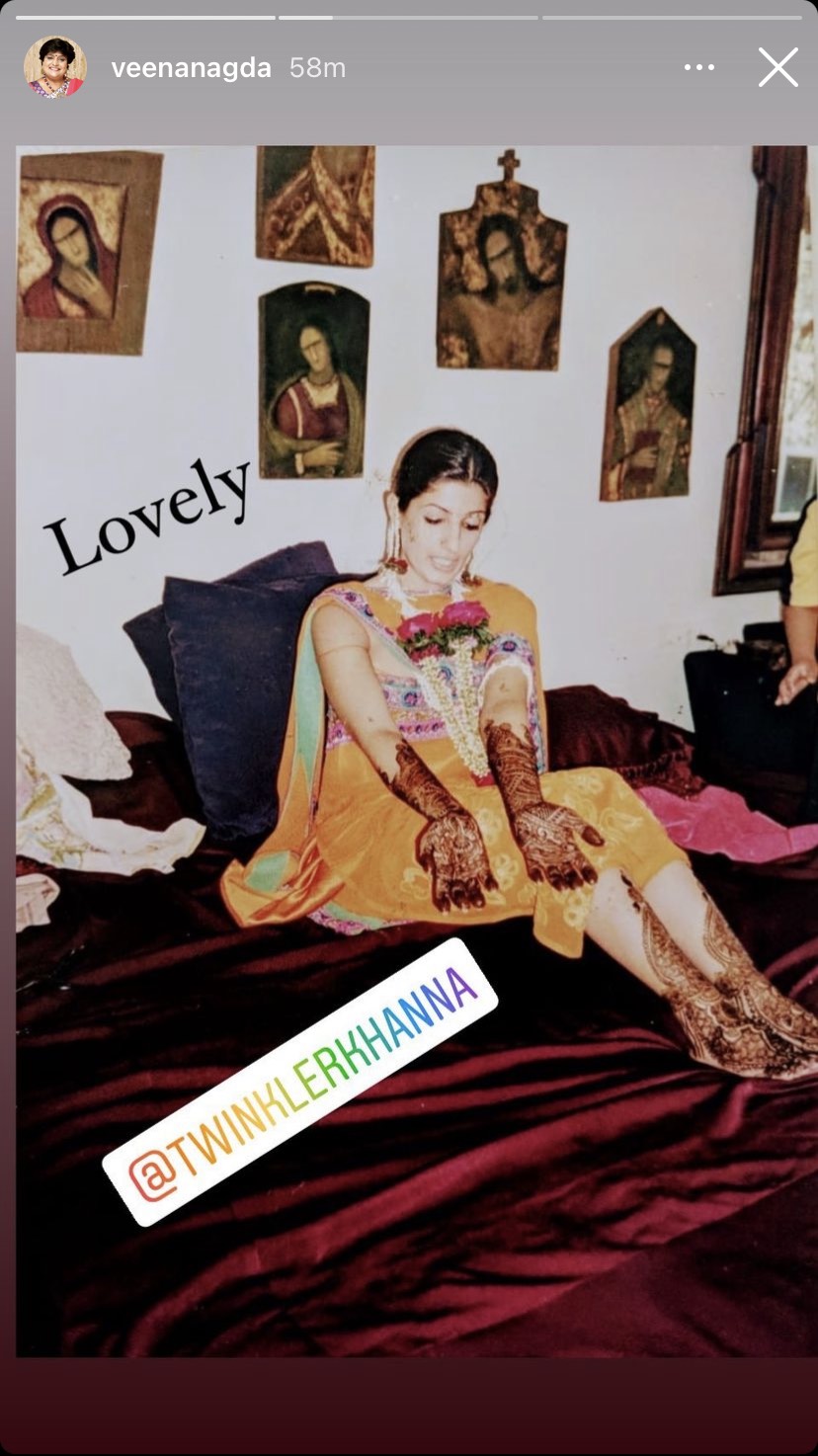 A few days back, we stumbled upon some of Akshay Kumar and Twinkle Khanna’s rare and unseen pictures from their wedding. While in two pictures, we could see Akshay and Twinkle enjoy their wedding function, in one they could be seen posing for the camera after getting married. In one picture, Akshay could be seen performing kangana rasam with his then-bride, Twinkle, who was flaunting her chooda.

Recommended Read: Akshay Kumar And Twinkle Khanna Enjoy A Sea Hammock In The Maldives As They Celebrate Her B'day 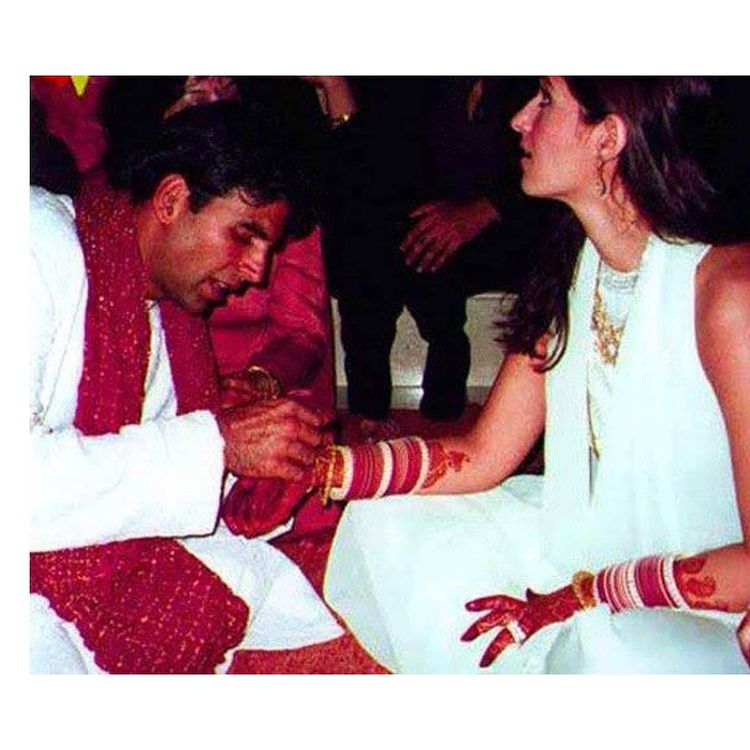 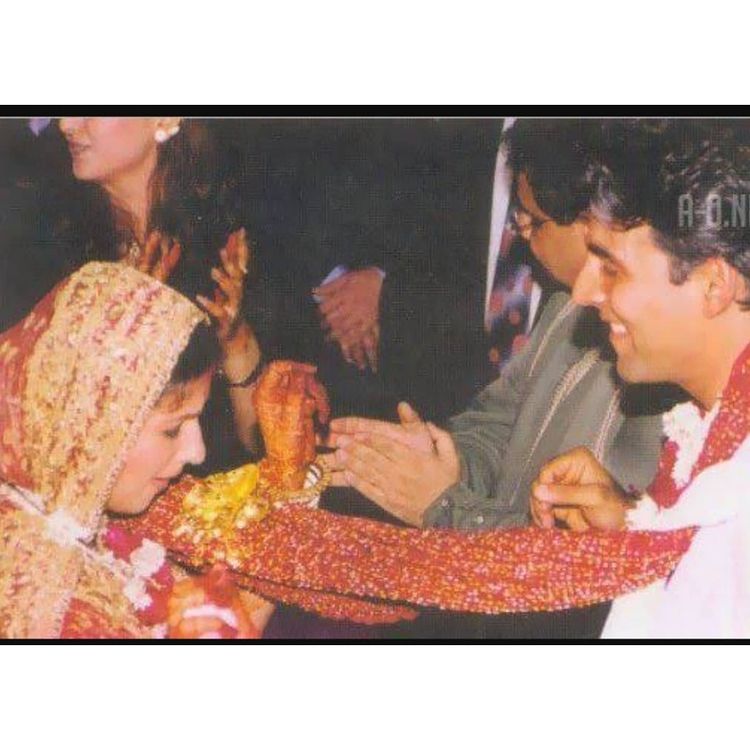 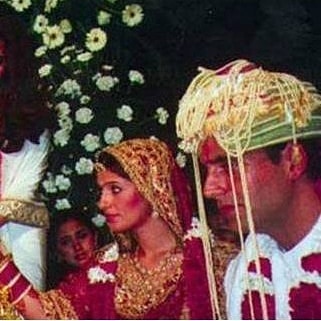 In an interview posted on her Tweak India YouTube channel, Twinkle Khanna had revealed that her late father, Rajesh Khanna’s astrologer had predicted her marriage to the Khiladi of Bollywood. She had also added that at that time, she was not even aware of who Akshay Kumar was! She was amazed to see that the astrologer had mentioned the full name of her would-be husband. Sharing the astonishing fact, Twinkle had said:

“Before I met my husband, that astrologer told him (Rajesh Khanna) and he told me, You will marry Akshay Kumar. And I was like, Who?” Akshay and Twinkle had first met during a shoot for the Filmfare magazine, in Mumbai, where he had developed an instant crush on her. In one of his interviews, the actor had confessed the same and had said:

"I met Twinkle for the first time during a photo session with Jayesh Seth for Filmfare. I still have that photograph. Thank you Filmfare!" We are in awe of how Twinkle Khanna was way ahead of her time and had worn floral jewellery on her mehendi, which is a trend of recent times.

Next Read: Boney Kapoor Wishes Daughter Anshula On Her Birthday With A Cute Photo, Calls Her His 'Genius Bacha'