Television actress, Dimpy Ganguly is all set to welcome her third child anytime soon. Check out as she revealed why she did not do dreamy maternity photoshoots for her first two pregnancies!

Bigg Boss 8 fame, Dimpy Ganguly is on cloud nine as she is pregnant with her third baby. The gorgeousness had taken a sabbatical from acting for leading a happy married life in Dubai with the man of her dreams, Rohit Roy. The lovebirds had tied the knot in 2015, following Bengali rituals. And within a year of their marital bliss, Dimpy was blessed with a little angel, whom she had named, Reanna. Later, in 2020, she had welcomed her second child, Aryaan Roy. And now, the actress is pregnant with her third baby.

For the unversed, it was on March 21, 2022, when Dimpy Ganguly had announced the good news by sharing a lovely picture with her kids, Reanna and Aryaan on her IG feed. While Dimpy had held Aryaan in her arms, her daughter, Reanna could be seen planting a kiss on her baby bump. Dimpy had flaunted her pregnancy glow and her baby bump in a beige-coloured floral printed kaftan dress.

Dimpy Ganguly Captures Her Son Aryaan Trying To Brush His Two Teeth, Standing On A Stool In Bathroom

Dimpy Ganguly Takes Her Son, Aryaan To The Hills For The First Time, He Reacted Like This [Video]

In an interview with the ETimes, the soon-to-be mommy, Dimpy Ganguly revealed why she did not do maternity photoshoots for her previous two pregnancies. The actress also shared that when she was about to become a mother for the first time, she was scared about a lot of things and had wanted a safe and healthy delivery. In her words:

“When I was pregnant with Reanna, we didn’t hire anybody for a photoshoot. My husband, Rohit took some pictures. He is very good with the camera. I was happy with that. When I was pregnant for the second time, I wanted to get one done. But then, Covid happened and everything was shut. So again it was pictures we took in the family. Luckily, this time around, my friend Rashmi was coming to Dubai. She approached me for the photoshoot. And I was happy to do it.”

In the same conversation, Dimpy shared that after embracing motherhood, her world revolved around her kids, Reanna and Aryaan. While focussing on their well-being, upbringing and pampering, she forgot to care for herself. However, during the maternity photoshoot of her third child, everything was about celebrating her body, and it felt good. Dimpy can be quoted as saying:

“When you become a mom, it’s always about your kids. You are so focused on their well-being, their upbringing, you somewhere forget to love yourself. You forget to pamper yourself. Suddenly, the photoshoot day was a day about me. Ya, my kids and husband were also there but it was more about me. It was a day about celebrating my body… celebrating this other arrival we are waiting for.”

Further, in the conversation, Dimpy talked about the mood swings, discomfort and challenges she is facing in her third pregnancy. Talking about how her children understand their momma’s problems and hubby, Rohit tries to support her, she stated:

“The discomforts and mood swings are more when you are physically challenged. With Reanna, I could just laze around, cook whatever I want, and take my own sweet time. Now, I am on the run. My day starts at 5.36am. It gets taxing. I am blessed to have resilient kids. Reanna is very understanding. She knows mumma is probably feeling challenged today. Nobody has control over the hormonal changes. Looking back, the support from your husband, family, and kids is all you need.” 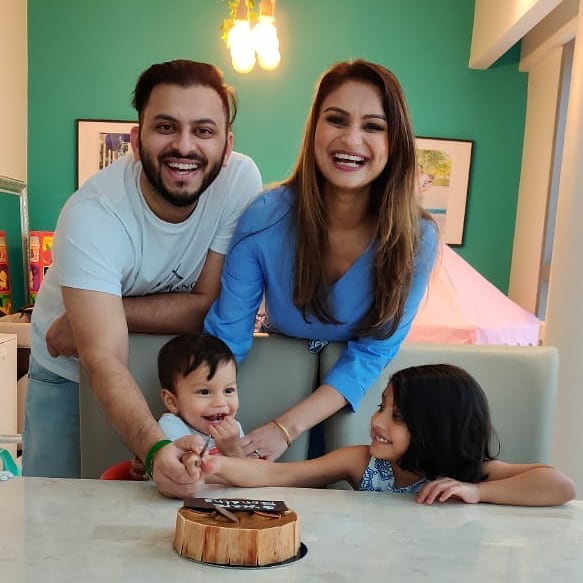 We are excited to get the first glimpse of Dimpy and Rohit’s little one! What about you?

Next Read: Ankita Lokhande And Hubby Vick Jain Reveal Their Plans To Have A Baby, He Says 'We Are In The Queue'