Yuzvendra Chahal and Dhanashree Verma are in Dubai for their honeymoon and visited Mahendra Singh Dhoni and Sakshi Singh Dhoni's abode for a welcome dinner. Pictures inside!

If there is any God of Cricket after Sachin Tendulkar, then it is no one other than, Mahendra Singh Dhoni. The Jharkhand boy had changed the game of cricket for every Indian and had created an everlasting impact on his fans and the cricketing world. He is not just a name, but an emotion that the entire nation feels when he is on the field. His humility and professional achievements made him everyone’s favourite and the reasons why every cricketer visits him and adores him even after his retirement. Indian cricketer, Yuzvendra Chahal, who had recently tied the knot with YouTube sensation, Dhanashree Verma has now taken his wife to meet MS Dhoni and his family. (Also Read: Arjun Kapoor And His GF, Malaika Arora Wish His Sister, Anshula Kapoor On Her Birthday, Share Photos)

On December 22, 2020, Yuzvendra Chahal had marked himself in the married men group after his wedding with Dhanashree Verma. The couple had shocked their fans by sharing their wedding pictures on their respective Instagram handles. In the pictures, we could see Yuzvendra looking handsome in a beige-coloured sherwani with a red safa and a matching red stole. On the other hand, Dhanashree had donned a gorgeous red lehenga with maroon undertones. She had completed her look with a statement choker neckpiece, a mathapatti and a nath. The duo had captioned their wedding pictures as “22.12.20. We started at “Once upon a time” and found “Our happily ever after,” coz’ finally, #DhanaSaidYuz for infinity & beyond!"

When Ziva Dhoni Shouted 'Papa, Papa' From The Stands To Cheer For MS Dhoni During An IPL Match

MS Dhoni's Photo With Newborn Daughter, Ziva As He Covered Her In His Arms To Protect Her From Crowd 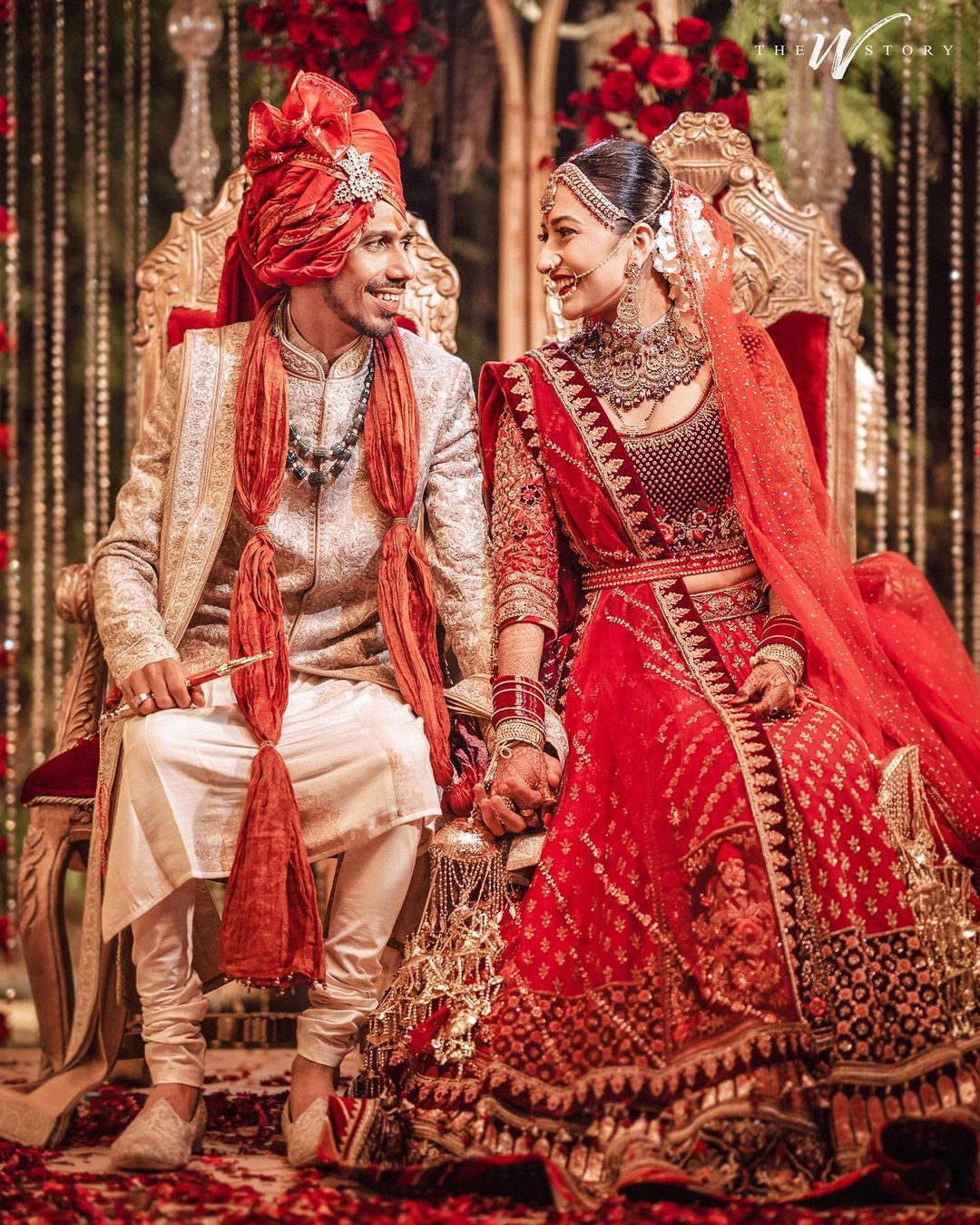 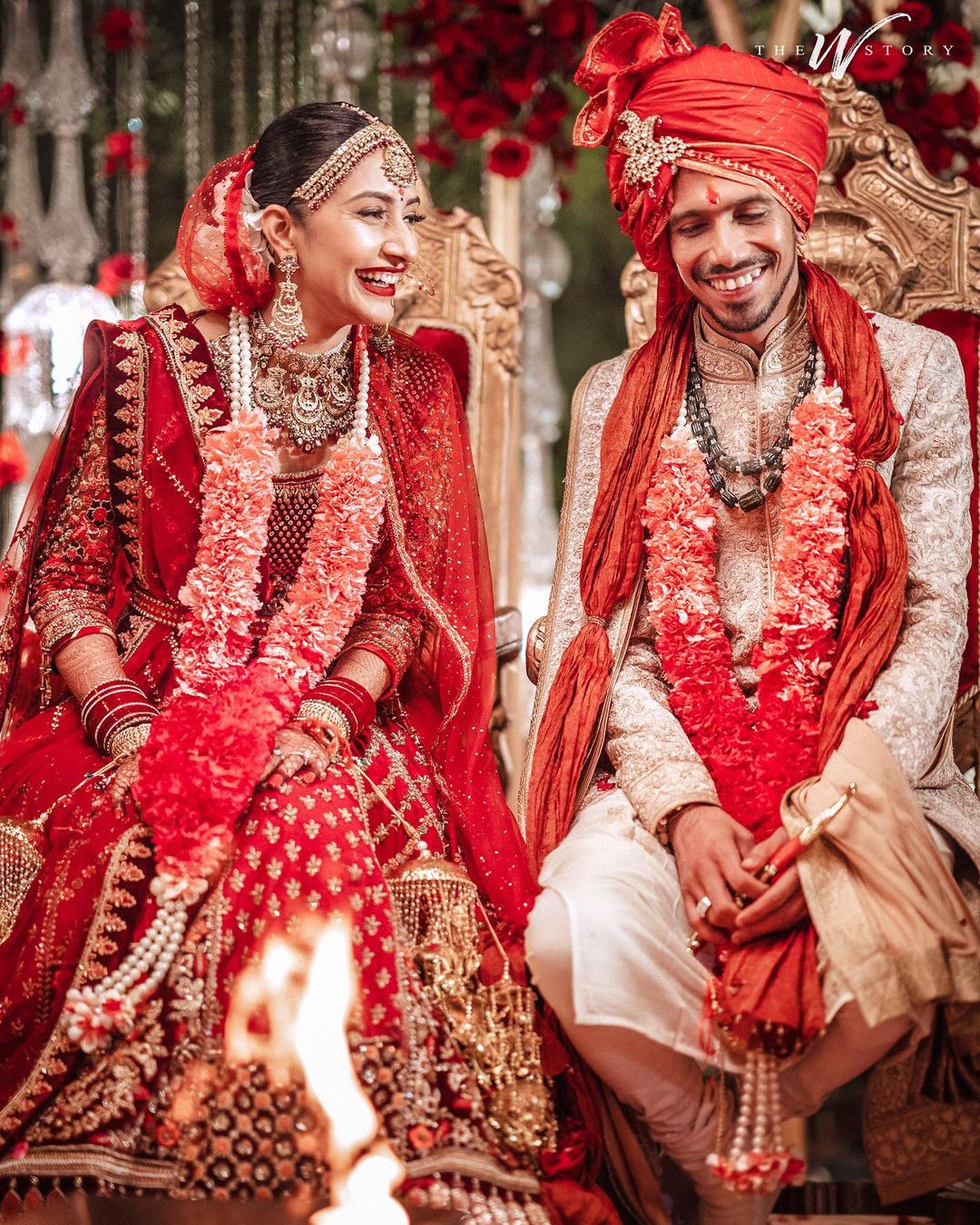 Yuzvendra and Dhanashree are in Dubai for their honeymoon and knowing that Mahi is also in Dubai, how could they skip the chance to meet him. The newly-wedded couple visited Mahi and his wife, Sakshi Dhoni for dinner in Dubai. Taking to his IG handle, Yuzvendra Chahal shared a couple of pictures from their dinner at Dhoni’s mansion. Sharing the pictures, Yuzvendra wrote, “Extremely happy & blessed.” On the other hand, Dhanashree also shared pictures from their dinner at Dhoni’s home and thanking Mahi and Sakshi for the dinner, considered herself blessed. She captioned the pictures as “Extremely blessed That’s all I can say Thank you @mahi7781 @sakshisingh_r for a lovely dinner Felt like home.” Take a look: 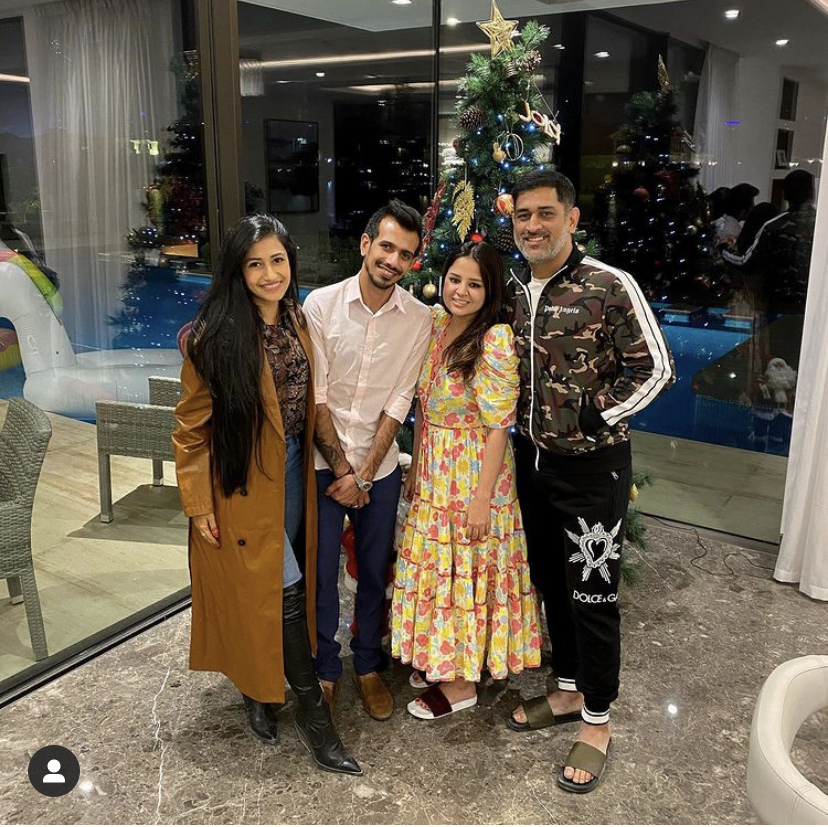 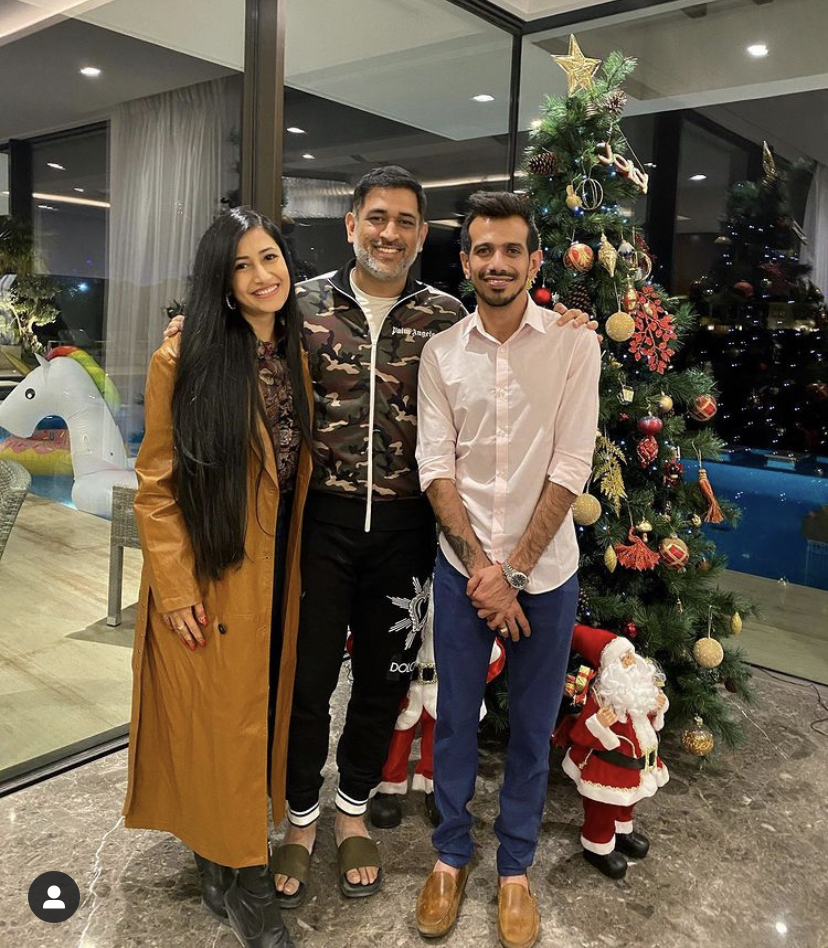 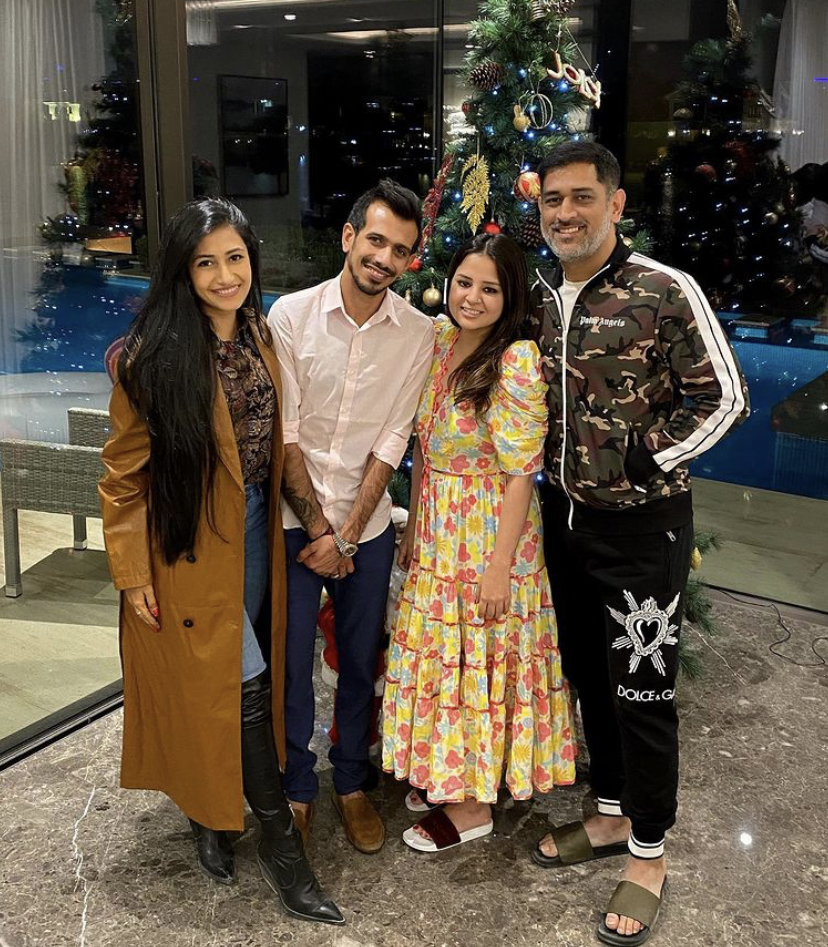 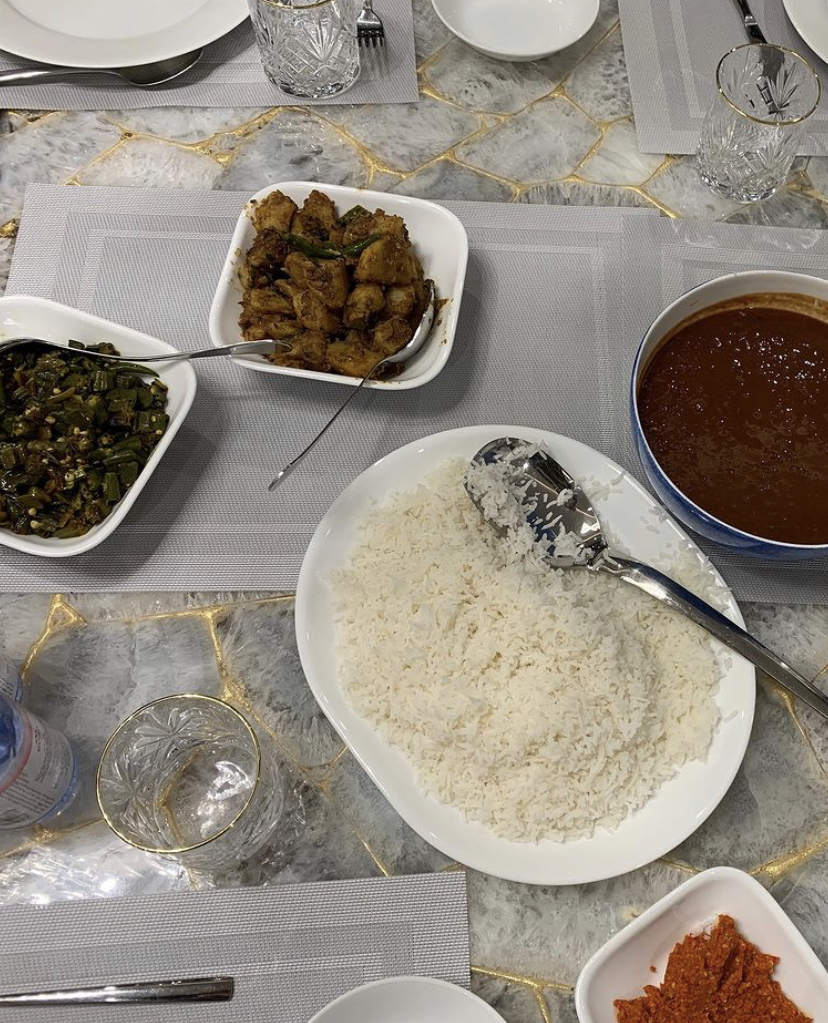 Talking about Yuzvendra and Dhanashree’s journey from singles to married, it was in August when the cricketer had made his relationship official with Dhanashree. She is a digital content creator, who describes herself as ‘Doctor, Choreographer, YouTuber, and the founder of Dhanashree Verma Company’ on her official Instagram account. To make his relationship official, Yuzvendra had posted pictures with Dhanashree from their roka ceremony. Yuzvendra had captioned his post as “We said “Yes” along with our families #rokaceremony.” (Don't Miss:Neetu Kapoor Remembers Rishi Kapoor, Shares An Array Of Pictures With Their Kids Ranbir And Riddhima) 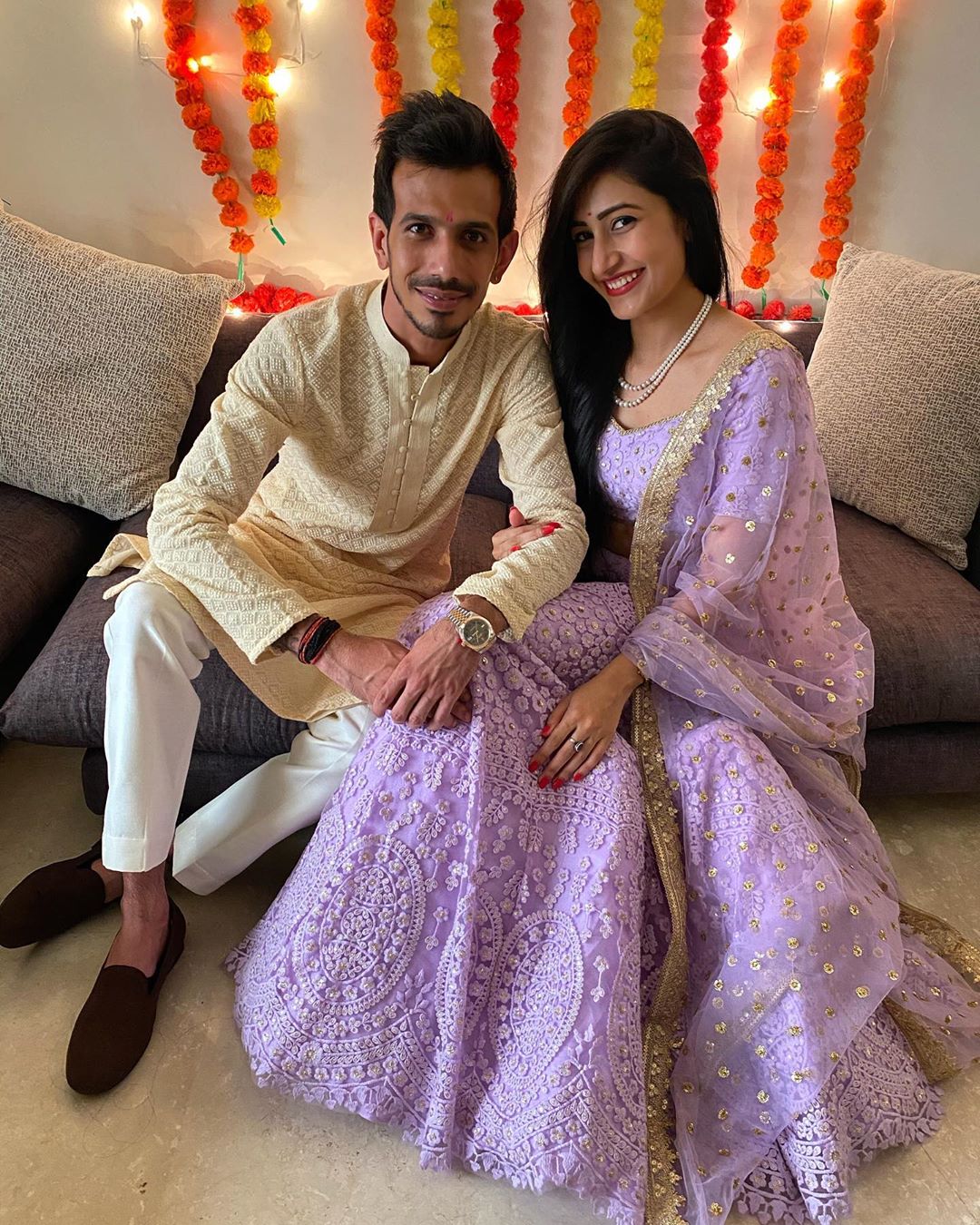 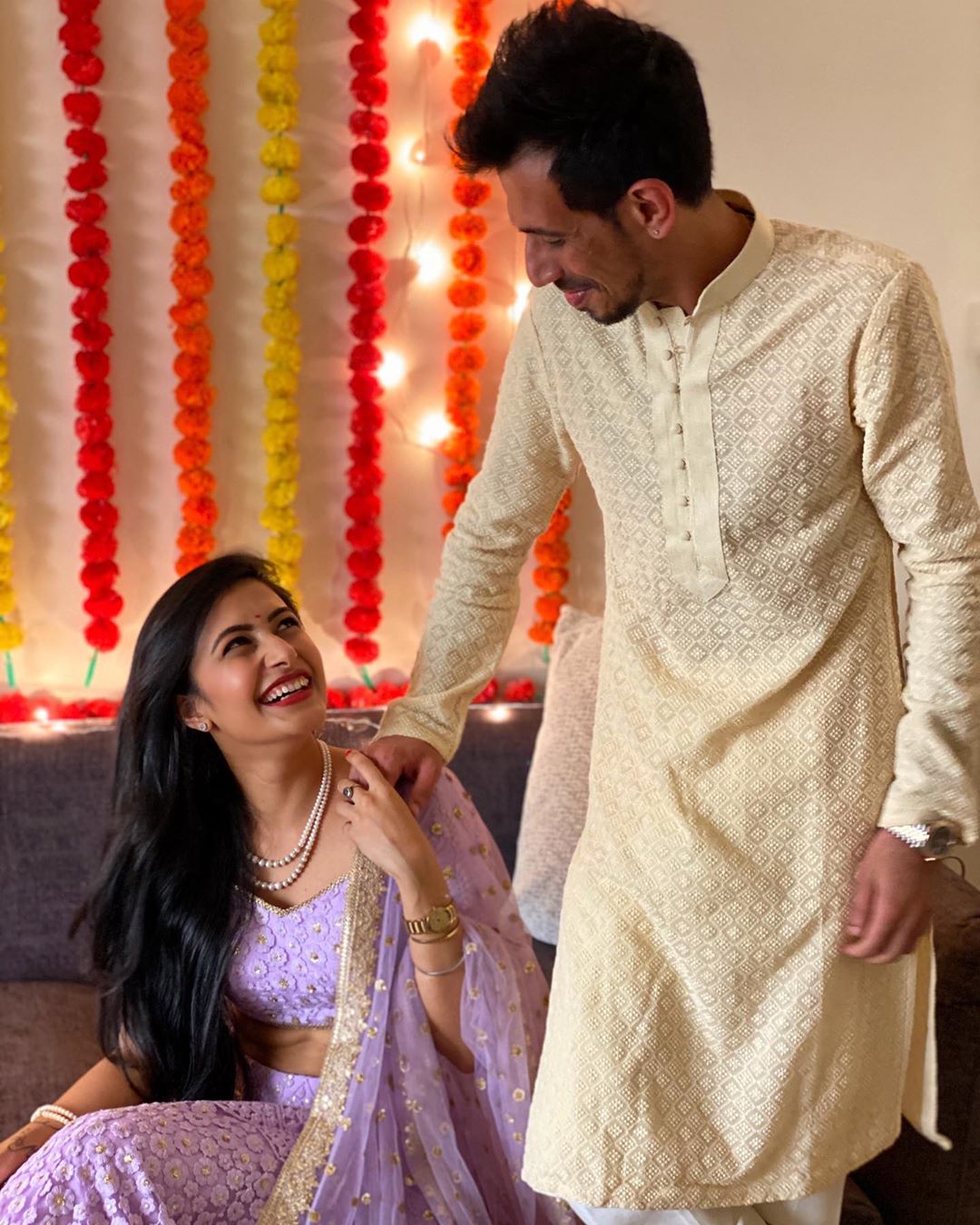 On December 23, 2020, Yuzvendra had taken to his Instagram handle and had posted a couple of pictures from his engagement ceremony with Dhanashree. In the pictures, we could see Yuzvendra donning designer, Tarun Tahiliani’s golden embroidered sleeveless jacket with a white kurta. On the other hand, Dhanashree had looked gorgeous in a golden blouse with tassel-detailing on the hem, which was paired with an intricate-embroidered lehenga. Alongside it, Yuzvendra had written, "Everything was just so beautiful. Engagement day." 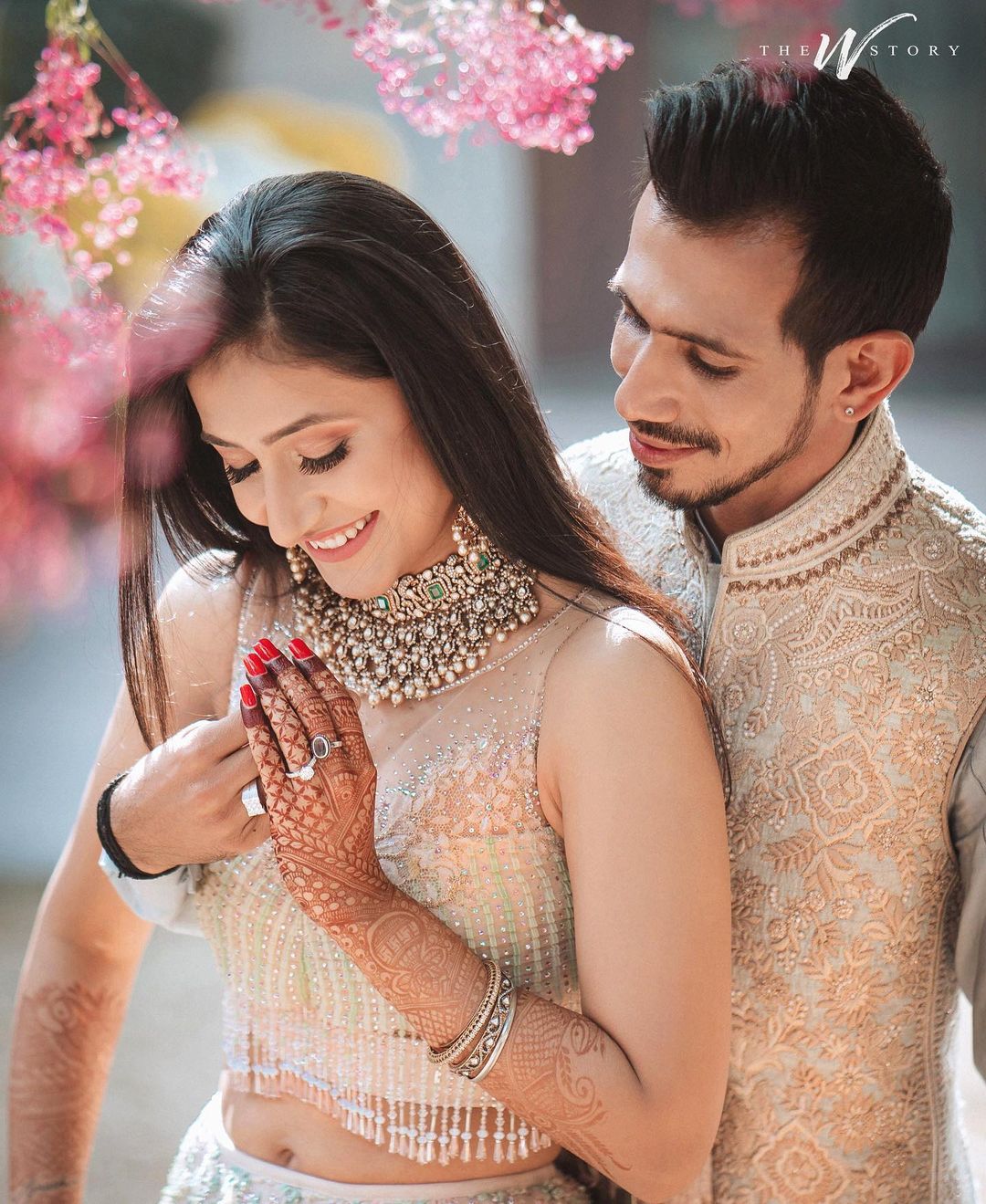 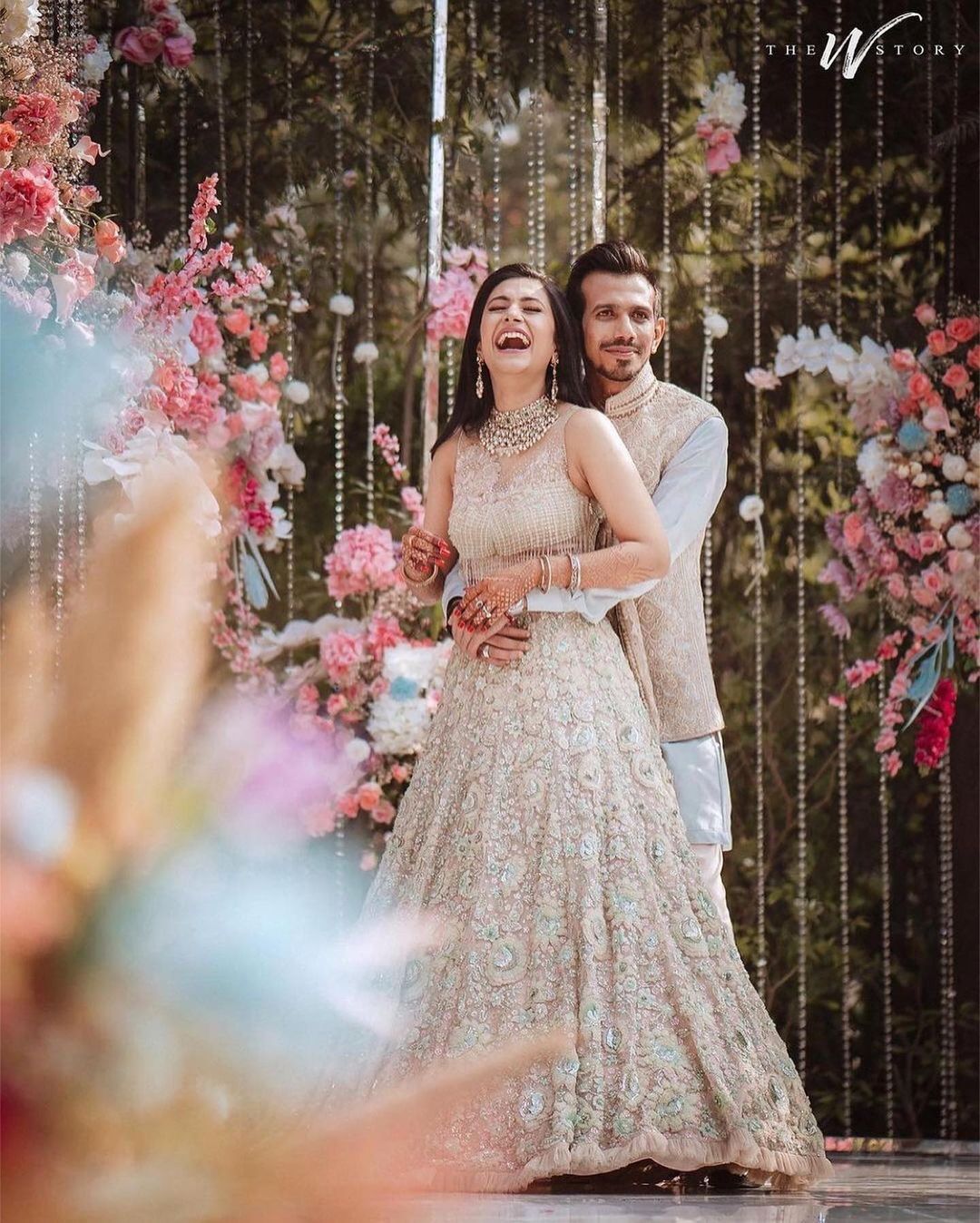 In an interview with the Hindustan Times, Dhanashree Verma had revealed the details of her love story with Yuzvendra Chahal. Sharing how it had all started, Dhanashree had said, “It started off as a student-teacher relationship in April. He had seen my dance videos on YouTube and knew about my work. During the lockdown, Yuzi decided to learn a few new things, including dance. So, he got in touch with me and we started our classes. Slowly we became friends and sort of felt a connect.” When asked who had popped the question, Dhanashree had retorted, “He did and I happily agreed.” (Don't Miss: Kunal Kemmu And Soha Ali Khan's Selfie Marathon, She Changes Her Mood According To Hubby's Face) 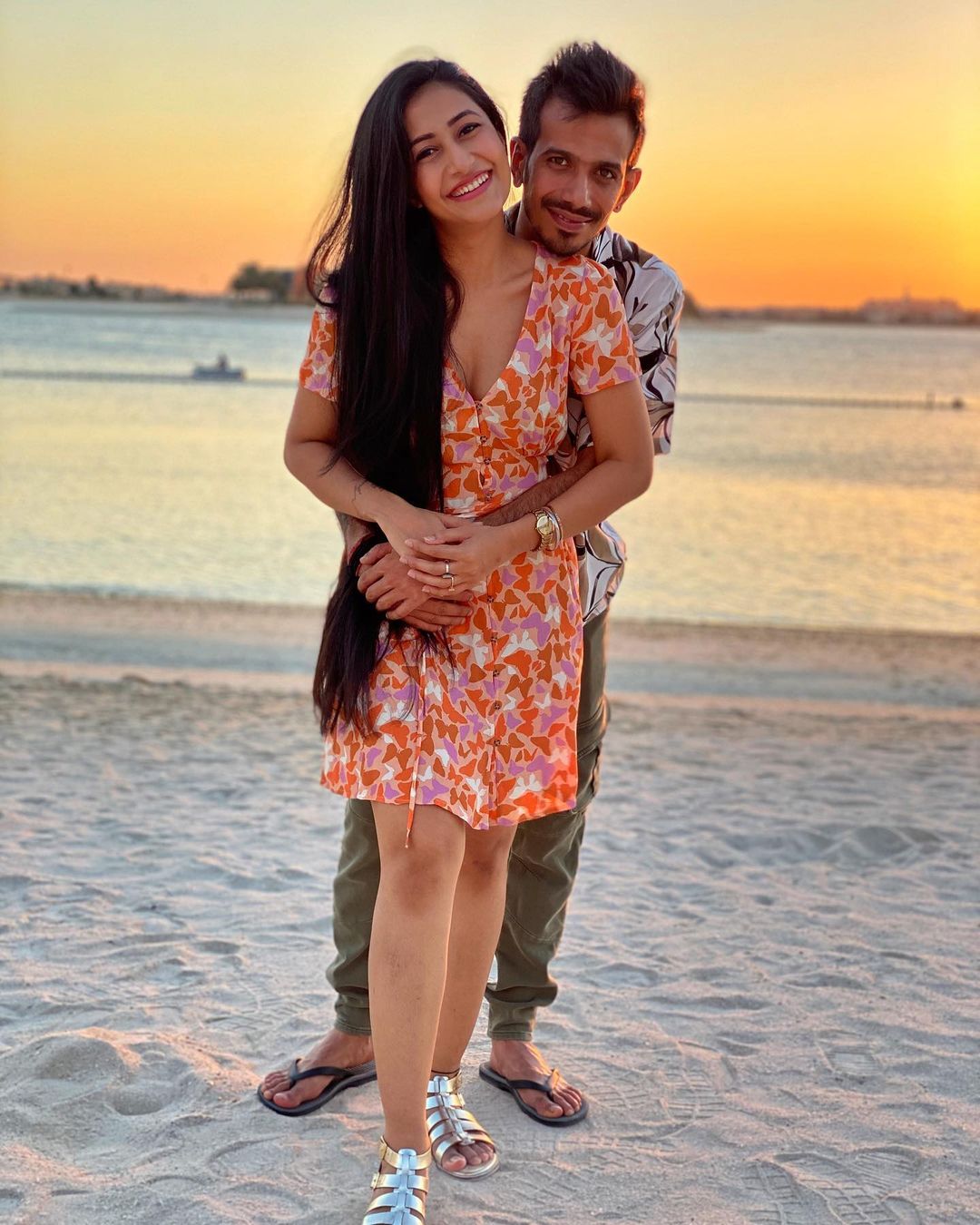 Happy honeymoon to Yuzvendra and Dhanashree!